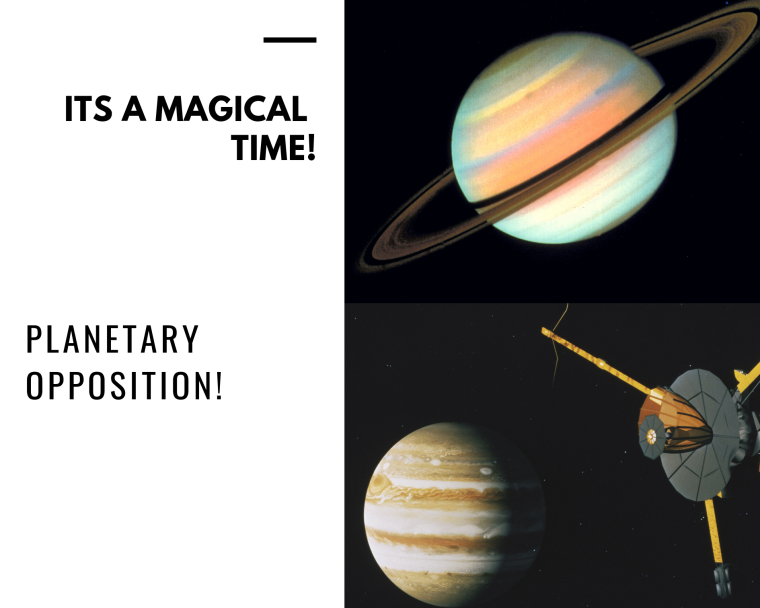 It’s our planetary opposition time! You may have noticed already! One of my favorites by far is Saturn but I’m Capricorn so of course it is! Saturn always brings goodies when it’s in that transit and additionally it is returning too! On June 10th we had Jupiter reach opposition. Magnificent Saturn reached his opposition on July 9th, rising to the east as the Sun sets to the west.

Saturn opposition is always the star of the show because next to Jupiter (literally) it’s beautiful! In 2019, Saturn makes a visit to our centaur, Sagittarius. Father Time graces the Archer with his presence! This means it’s go time for much of the world’s population. Saturn heads towards his home constellation of Capricorn. This indeed is one of the southernmost oppositions for Saturn for the next few decades. This also means that in 2019, Saturn opposition will ride high across the zenith for southern hemisphere observers near midnight, but there will be some difficulties seeing it for observers up north. Saturn won’t peek north of the celestial equator until 2026.

Saturn is crossing the star-dappled region near the core of the Milky Way galaxy. But he also is visiting other locations that add energy. For example: Saturn is also very near a patch of sky around the star Tau Sagitarii. Saturn is also in the midst of a series of fine lunar occultations in 2019, running out until December 2019. Yep, this year we’re seeing Saturn do his thing and it’s magical. Why? Well, it not only produces magical effects in rituals but it also brings success on top of there being a light show of sorts. The opposition creates what’s known as ‘opposition surge”. This enhances the planet’s brightness, brought on by a reflective effect. This effect is especially prominent on Saturn, when its rings are at maximum tilt with respect to our line of sight or Sun light, and it is! Saturn and the Sun opposed one another with Earth in the middle.

So we also had Jupiter take opposition and Pluto enters opposition on July 14th. Neptune follows two months from now on September 10th, and then Uranus on October 28th. It’s like a planetary harvest! But what does it mean? Well, whatever was going on in your pathworking at the time? Forget about it now. The energies will reverse. Fortunately, many were struggling so everyone can be prepared to enter into a time of luck, fortune, love and more positivity. Especially with the specific planets that are helping us like Saturn, Jupiter, Neptune, and Uranus. They bring wealth, success, advancement, awareness, and wisdom to many. If you were having a semi smooth road so far, you may be in for a bumpy ride. But the great thing is, in either case if this goes good or bad for you, those who are masters in high magic can make it okay again for you because the energy can be redirected by angelic magic.

Don’t forget that even though we have an advantage here, other planets may get in your way still. Retros stink and planetary bodies, stars, meteors, the moon, asteroids, and the mansions effect everyone differently. It’s best to have your astrology done. I suggest a “Grid Energies” Reading, or a “Planetary interferences” Reading done for you to learn to get around everything. You don’t have to be controlled you know? Take advantage of this time though! Get some spells. Gave your karma cleared, or try the readings above! It’ll help and the magic especially! Enjoy the big bright starry sky show above and the stars of the show, the glowing planets!