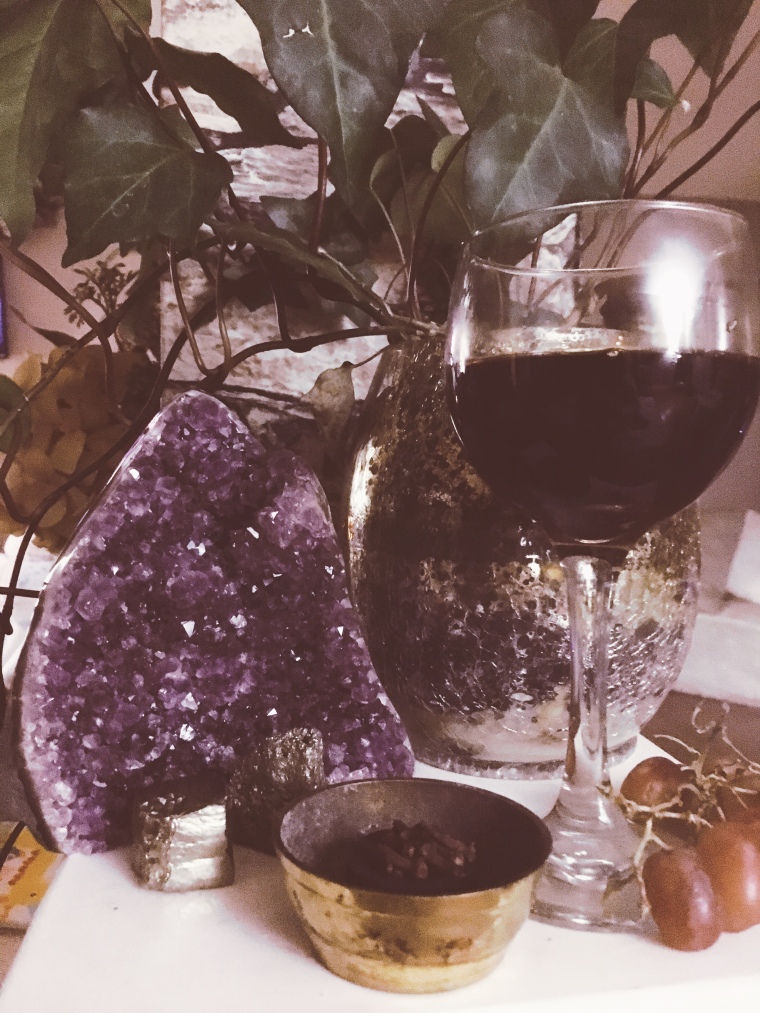 Perhaps maybe you don’t remember, but in 2013, I had started actually uploading videos to YouTube. During that time there had been a video on how to create spiritual space. It has since been deleted from the channel though. I have always had an altar. When visitors came, I’d move it. It’s personal, and whenever someone would see it, tons of questions came. When it comes to my own private spiritual practices, I don’t always like to have to explain what every little thing means because it may have a very deep profound meaning for me. Also my practices are not things done here on earth and are very different.

In 2013, and up until 2016 I had rented a house that was a beautiful rancher with a finished basement or work.But started to interrupt things with my family who had lived upstairs. We started to look for extra space and found that the house immediately next-door, have been for rent as well. So my parents and children had moved into the adjutant house and I opened the upstairs to the rest of the public visitors for meditation, reiki, readings and hypnosis. It was beautiful because, already downstairs I had couple of different rooms set up for those activities, but now I was able to change things up to where we would have extra space for people to actually stay a few days here or there due to having that extra guest rooms now. Those were people that I had already known in the local area.

Moving into the house next-door, the rugs and carpet were not really the best condition. There were spills all over the place from the previous family and some burn marks all over the carpets where the former residents had dropped their cigarettes. We had planned on renovating the space, but it seemed that paying rent to use two properties was really taking a lot of money away from being able to do that. I had wanted to save up in order to buy a place where I could have the same set up for business, but also have enough personal space for my family as well. My father had suggested that I just stop having people come in person for a little while and shut down the other rental property. Dad has said that maybe for the next year or two, to center my work mainly online for a little while then. Of course, I would still have a person come in every now and then if they needed it, but it would be far easier to save money if I just had listened to his advice. So I did.

My father had just recovered from having cancer through the healing sessions and other treatments for the first time that he had gotten cancer. He truly did not have enough strength to move all of his possessions back into the better home next door, that they had just left previously, in order for me to save money. He had figured that since they had already moved all of their personal things and furniture into the new rental, to just leave everything there and shut down the “spiritual home”. This really made me sad though. Since I had a few guest rooms there, there were even times that I would allow homeless people to sleep there. People that I had known while growing up, had been struggling with drugs or loss of jobs, and didn’t have a home in the area. I am the type of person that I’m not afraid to extend a helping hand to anyone. A majority of the people that I had known while growing up had ended up on drugs or getting into trouble. I had always warned them, but they did not listen, sadly. But that did not mean that I wouldn’t still be kind to them, or even try to help if they needed it. But for a little while, I would have to turn people away for a place to stay. It had not been often, but just here and there, that I would allow somebody in a very bad place, to sleep in one of the guestrooms. It’s not like I was fearful that they would steal anything. What would they do with the Crystal? Or a deck of Tarot cards? They wouldn’t get far with those items. However, the other rental had a lack of space and I wouldn’t be able to help anyone to have a warm place to sleep. Besides, not in the house with my family. It could be dangerous.

Nevertheless, We continued to reside in the smaller home, and it wasn’t really in the best condition. My mother often gave up on even trying to go out of her way to scrub the place because it was beyond repair. I of course being the perfectionist that I am, I sometimes had a little bit of a breakdown living there with the stains. But I did appreciate the fact that I had a place to live at all, and that this new set up was definitely helping us to save more money. I really missed the property next-door though. It went up for sale shortly after I had moved my things out. But I still had some pretty angel statues downstairs. I never did get the opportunity to retrieve them. Once they locked the place up to put it up on the market, the bank who had taken ownership of the property would not allow anybody to enter.

My personal spiritual alter ended up being put into a room that my father had cleaned up and painted, just for my work in the other rental property. He knew that I was very sensitive and a needed certain colors to boost my vibration. He didn’t want me to feel discouraged looking down at the floor and seeing a few stains here or there. He wanted me to be completely focused for the mission that I have been put on Earth to do as an angel. So he had taken one of the extra rooms and painted it a beautiful lavender color and since I didn’t sleep, I didn’t need a bed but we did put a sofa in there, just for me to sit and relax when should I need to. My kids sacrificed a little too, as they shared a bedroom. There were only three after all. The one for my work, the second for my parents and the third for my children to share.

By 2016, we had found a new home that had a split level that provided a place for me to live like having a separate home of of my own, and a place to work. My father decided to get the house for us, as it was taking forever for me to save up. I always gave a portion of my earnings to charity. I still do. However, I was grateful for the blessing and set up my altar right away. I wouldn’t be able to provide a place for any troubled people to sleep should they be in a bad place and need one, but if a very close friend wanted to visit, then that would be fine.

But my altar? I would take it down during visits. I have private spiritual thjngs that I add to it. While my life is in the public a lot, I still like to have my own sacred practices. I still haven’t even shown my closest friends my sacred methods or practices. That’s just the way that I am. I always believed that how spirit with me, is private between me and spirit. I will teach wisdom and do spiritual work for others in order for them to get answers using my own sacred abilities and gifts though.

And I am so very grateful for everything that God and spirit have done for me and others too. The spiritual altar shows gratitude but I have dedicated other bigger things to heaven too. Spiritual space should be exclusive for spirit. The room that I have devoted to the spirit, I don’t allow very specific things within that room since it is for spirit exclusively only. It’s sacred space. There is no cursing, no drinking, no arguing, no television, and especially no music other than what the Spirits enjoy. Not that anybody in my home really partake in any of that anyway, but when it comes to television and music yes my parents and my children do you watch and listen to some of the main stream stuff. That’s not allowed in the spirit through Minero. This way, that entire room is calm and serene should anybody need to come in and use it, to pray or just get away from it all. Spirit will wrap around them, fill them, as they live in the atmosphere. An altar?

I have a few of them. One of them is an altar for sacred Scriptures and writings, as well as journals full of experiences and spells. Then I have another which is devoted to my main deity, and then another one that is devoted to the spirit I will be working with mainly that week. Lastly, I sometimes have another smaller one set up for any other additional spirit helping me or clients, as they are entitled to have their own and not share one.I have made it a goal to at least share one of those each week. This way others can also connect with the spirit and learn about the spirit too. Last week we did an altar for Chamuel. This week Dionysus. However, I have been trying to do a more contemporary altar for worship, for my assisting spirit of the week. I do something a little more decorative instead. The other altars are traditional and unique.

Spiritual space is truly important for worship and also meditation. Spirit will help you through your meditation if you should offer them the right type of incense. Please join me each week on Facebook as I lead my groups through different altars and what to put on them, for spirit of the week. It helps to show the reverence and respect. In doing so, spirit is around you more strongly.