Grianstad, the days of many names. There’s a time that can be called many things due to the multiple meanings surrounding it. I have heard those in the spiritual plains above call it:

Days of the Sleeping Goddess

The Coronation of the King

Return of the Hunter

And so many more. What I love most about this celebration is, that it incorporates several of them. First we have the celebration of the equinox.   During the first week of October, we have the feast of Tabernacle ‘s. Then there is  Samhain, and the very next day after there is All Saints Day. I’m so starting from the day of the equinox on September 21, all of the way up until November 1, it is a month jam packed with festivities. It’s always been tradition since Celtic tribal times to make our own decorations, tools, potions, oils, herbs medicines, tinctures, and toxins . That’s right! I said toxins! It’s true that back in those days, people keep poison someone and get away with it. A lot of people would pay for such a poison, to be rid of their enemies. And we weren’t talking about somebody that they just merely didn’t like either. We’re talking about a full on adversary. Since there were laws against murdering your fellow man even back then, one had to be very careful in well they eliminated their enemies. Poison was probably the number one pick up that time. Back in those days, people paid for medicines and tinctures of all kinds. If a woman had gotten pregnant out of wedlock, or even outside of her own marriage bed… She would pay for a poison that would only read her of her baby. Someone to the baby and would pay for potions that could help them become pregnant. There were also people that saw after oils for extreme injuries that seems to never heal. Injuries I speak of are very similar to the one that came Henry the eighth had on his leg. It was a wound that every now and then would get agitated and then fester until it broke open, and was weeping. It just seemed to keep doing this and was unhealable. Oils and so on, helped.

This month will be a month of making all the spiritual tools we need for my work. I’ll also be harvesting all of the herbs and wonderful vegetables that I grew my garden. I’ve actually already started, except my pepper plants are coming in little bit sporadically. It’s not really a good thing to just have one pepper grow every few months that you harvest off because if you leave it there, it will rot. Therefore we had a nice growth spurt during summer and autumn brings slow growth. I’m excited about the habanero peppers though.

For the festivities, I’ve added them to the Spiritual theme calendar for this month below. Good stuff! 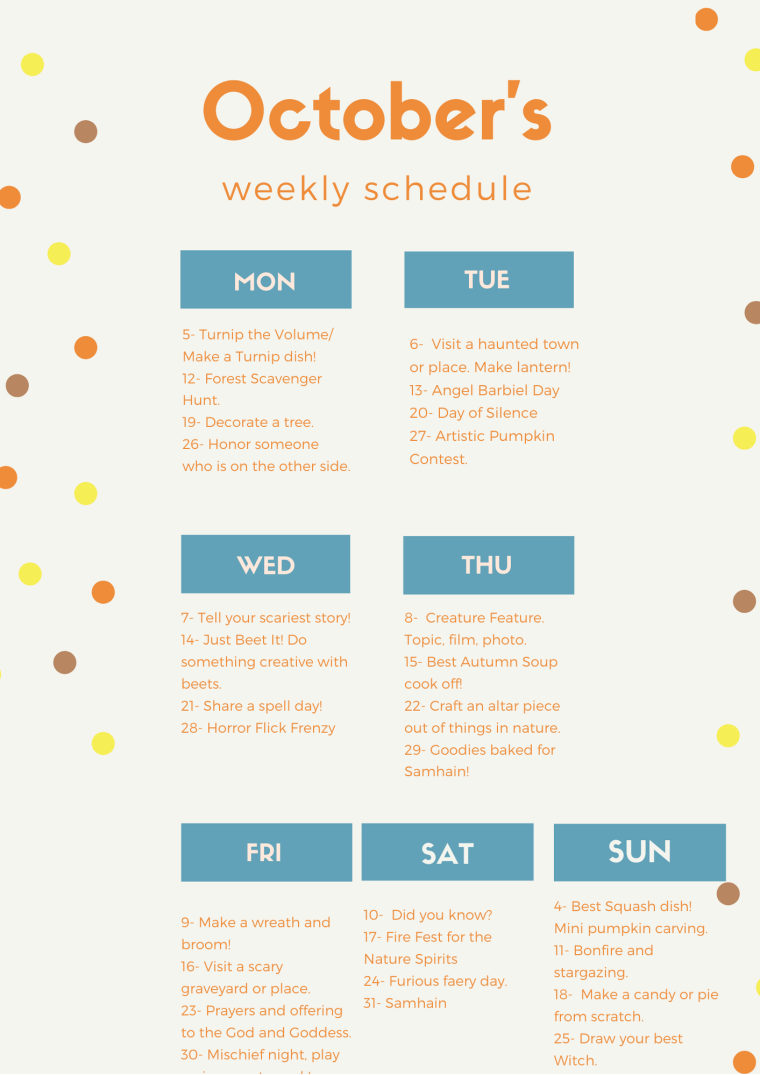 I’ll be more descriptive about the events but be creative! Life is really abnormal nowadays and you deserve to have a good time. Your family will appreciate the fun too, believe it or not. When I forewarned about the upcoming indoor generation, I wasn’t kidding. Everything will be as the angels have said. But we can still make life a ton of fun! Look for my social media posts on the activities and more! You could even really get into the spirit and book a session with me for a tarot, Ouija, or a channeling with a spirit of the ancients. What about your past lives? Get a memory on one Halloween night from your past. Ooooo! What was it like?

Get ready for an entire month of excitement!

One thought on “By The Day: Octoberfest”